Preliminary Injunctions: How to Get Them, How to Avoid Them 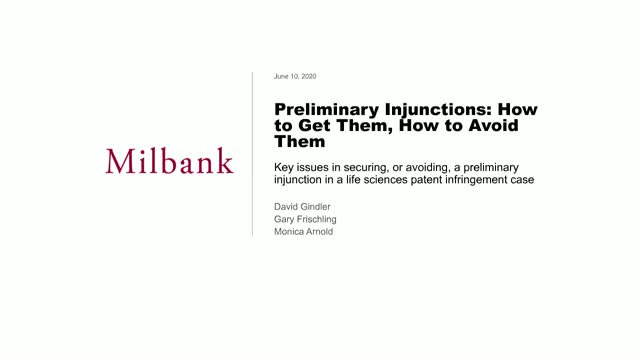 Sometimes monetary damages aren’t enough. In cases between fierce competitors—whether innovator vs innovator, or brand vs generic—an injunction at the beginning of litigation may be more valuable than monetary damages at the end. And for a new company with a single product, the prospect of a preliminary injunction from a well-funded rival may threaten the company’s very existence. This webinar will explore the strategies, arguments and evidence that have carried the day for patent holders and for accused infringers in a preliminary injunction battle. Among the issues to be addressed are: What arguments on the merits are most likely to succeed or fail? When are price erosion and lost market share fully compensable by money, and when do they show irreparable harm? Will new or different arguments be made in cases involving biosimilars, compared to small molecule drugs? Do the balance of hardships or the public interest ever make a difference to the outcome? Speakers include: Monica Arnold, Associate, Milbank Gary Frischling, Partner, Milbank David Gindler, Partner, Milbank
Related topics:
Patents
Life Sciences
Injuctions
Infringement
Innovation