DDoS Attack Trends and Predictions for 2022 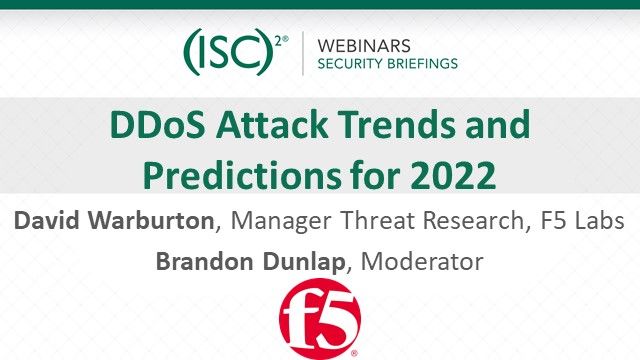 Denial of service attacks became larger and more complex in 2021 with peak attack bandwidth now more than five times larger than it was in 2020. From disgruntled customers, to organized cybercrime and even modern day cyber warfare, DDoS attacks are still a go-to for many threat actors with effects of successful denial of service attacks ranging from temporary disruption of an online event to outages of critical infrastructure. Increasingly, DDoS attacks also used by cybercrime gangs to coerce payments of ransomware demands. While DDoS mitigation services are getting better at deflecting large volumetric DDoS attacks, the shift in tactics to focus on protocol and application DDoS makes mitigation a more complex task. On June 14, 2022 at 1:00 p.m. Eastern/10:00 a.m. Pacific (ISC)² and F5 Labs discuss the F5 DDoS Trends report which analyzed thousands of attacks over the past two years to uncover how DDoS attacks are changing. We will showcase which industry sectors are most frequently attacked, which suffer the largest and most complex attacks, and some of the relevant security controls which can be employed to counter the growing threat. Join this webinar to learn: -What the most common forms of DDoS attacks are -Which industries are most effected -How attackers are building botnets and changing tactics -How to use the MITRE ATT&CK framework to map effective security controls
Related topics:
ISC2
(ISC)2
CISSP
Information Security
Cyber Security
DDoS Attacks
Mitre Att&ck