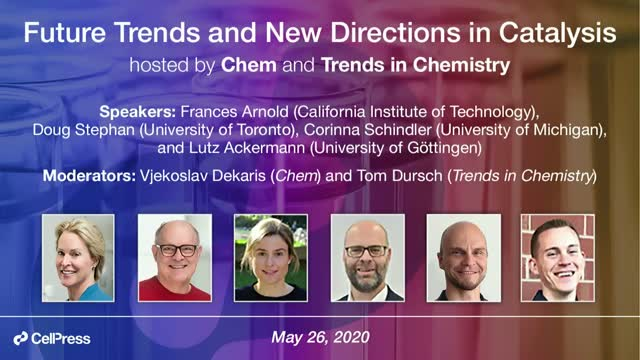 The field of catalysis in chemistry was historically dominated by the use of transition metal catalysts. Due to a unique set of properties, precious metals in particular have played an integral role in developing catalysts for new modes of chemical bond activation and formation. One major and inherent drawback of precious metals, however, is their scarcity; in order to transition chemistry to a more sustainable use of the world’s limited resources, finding alternative strategies for catalysis is a major driving force in contemporary research. In this spirit, this webinar will feature talks about four areas of sustainable catalysis from leaders in their respective fields, highlighting state-of-the-art approaches and providing guidance for future developments in these areas of research. Speaker Information: Frances Arnold is Linus Pauling Professor of Chemical Engineering, Bioengineering and Biochemistry, and Director of the Donna and Benjamin M. Rosen Bioengineering Center at Caltech. She received the Nobel Prize in Chemistry in 2018 for directed enzyme evolution. Lutz Ackermann is a Professor at the Georg-August-University Göttingen. The development and application of novel concepts for sustainable catalysis constitutes his major current research interest, and he has a topical focus on C–H activation. Corinna Schindler is an Associate Professor at the University of Michigan. The research interests of her laboratory include the synthesis of complex molecules and the development of new synthetic transformations between carbonyls and alkenes. Douglas W. Stephan is a Professor at the University of Toronto and a world-leading researcher in inorganic chemistry/catalysis and the founder of the field of “frustrated Lewis pair” (FLP) chemistry. He has received many national and international awards, including Humboldt and Killam Fellowships.
Related topics:
chemistry
catalysis
synthesis
science
materials
Sustainability
electrocatalysis
biocatalysis
Researcher