Investing in the real economy: social impact at greater security 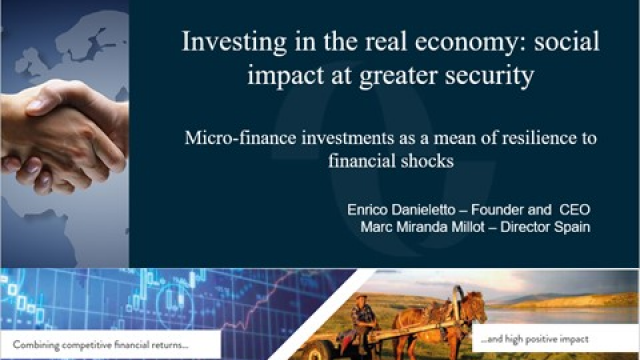 For years, economic theory suggested that shareholders’ remuneration was the ultimate goal of any company or corporation. However, this is nowadays changing. The world of socially responsible and sustainable investments is growing like never before. We’re probably in the early stage of a revolution. It all started in 2016 with the Paris Agreement, but the coronavirus pandemic has been the real tipping point. How is microfinance seen in this context? We are living in a world of zero-to-negative interest rates, which paradoxically ended up discouraging large banking groups from lending to smaller businesses. In developing countries, the difficulty of accessing bank loans is the real gap to create an efficient and sustainable economic and financial system. Thanks to the intervention of microfinance institutions it is possible now to free poor people from the unreliability of informal channels. Although microfinance has existed for centuries, today it can be considered the most notable form of impact investing. We are at the beginning of a new age, in which ESG, microfinance and impact investing will drive the financial industry towards a more sustainable future. You will take away: 1) A greater understanding of the microfinance as an effective mean for sustainable finance. 2) Practical tips to successfully diversify and being less exposed to the volatility of the global financial markets while having the highest growth potential due to the deleveraging in the banking sector. 3) The outlook for the economies in which these SMEs microfinancing operates. 4) Become aware of why microcredit, which has always been considered as one of the forms of expression of ethical finance, has revealed itself as a tool capable of combating financial exclusion, guaranteeing the weaker groups a useful means for integrated social and economic growth.
Related topics:
ESG
SDG
Investment Management
Investment Strategy
Fund Manager
Fund Selector
Microfinance
Sustainable Investing
Sustainable Finance
Impact Investing