‘Urgently Reducing the Smoking Rate in Tasmania: Policy and Strategy’ 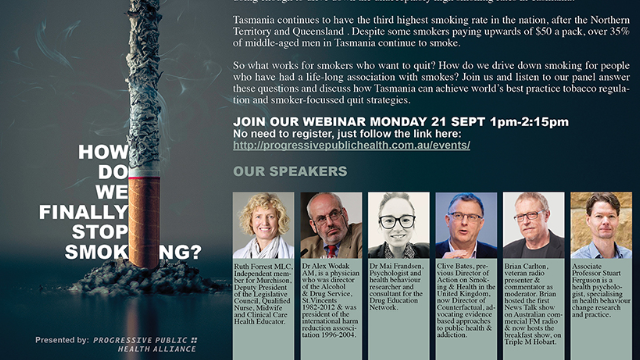 Despite Tasmania leading the way on public health initiatives in tobacco control, the results of the National Health Survey 2014-15 indicate that Tasmania continues to have the second highest smoking rate in the nation, after the Northern Territory. Tasmania’s current smoking rate is 18.9% compared to a national current smoking rate of 16.0%. Within the Tasmanian population there are groups of individuals with significantly higher smoking rates than the general population. Current smoking rates are especially high for males aged 35 to 44 with a rate of 35.7%. The proportion of Tasmanian women who smoked during their pregnancy has markedly improved between 2010 and 2014 and is statistically significant. In 2010 the overall rate was 23% and in 2014, the rate was 14.3%. Tasmania had the second highest proportion of women who smoked during pregnancy among all states and territories in 2014.
Related topics:
Public Health