Insights for CISOs: Cybersecurity implications of the war in Ukraine 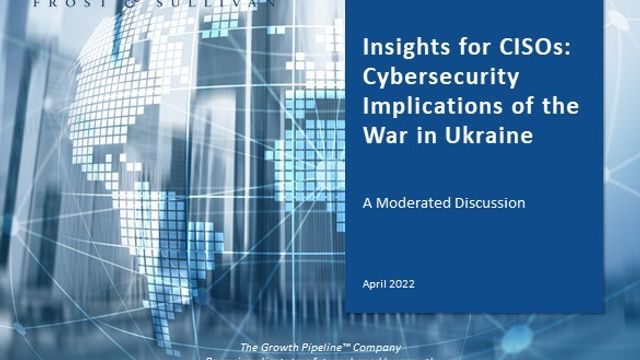 The war in Ukraine changed geopolitics in Europe and the NATO alliance faster than anyone could have imagined. Sanctions, flight bans, technology sales bans, asset seizures, the inability to use the SWIFT system have been used to apply pressure on the Russian government. One aspect of the war that is under reported is the cybersecurity dimension and if sanctions and technology sales bans will drive new waves of ransomware attacks and cyber economic espionage as a means to fuel the continued modernisation of the Russian economy. Cybersecurity executives from Finland, Slovakia, and Israel have come together with Frost & Sullivan to discuss the potential cybersecurity implications of the largest war in Europe since World War 2 and offer well balanced opinions on the use Russian cybersecurity products in a world that has changed dramatically since February 24th, 2022.
Related topics:
Frost & Sullivan
Cyber Security
Ukraine
Sanctions
Ransomware
technology sales bans
SWIFT system
cyber economic espionage

Information & Communication Technologies
Upcoming talks (0)
On-demand talks (43)
Subscribers (25503)
Our global Information & Communications Technologies team uses a holistic approach to the IT industry and vertical market knowledge to deliver unique and invaluable content to clients. New technologies such as AI, cloud, IoT and next-gen mobile are driving forces behind digital transformation and are creating continuous disruption in every global industry. Technologies have a profound effect on business model innovation, many of which have led to ongoing transformations sweeping the industry. Our IT intelligence consulting experts help both suppliers and end-users harness emerging technologies for new growth opportunities.…