Introduction to SmartNIC DPUs for the data centre 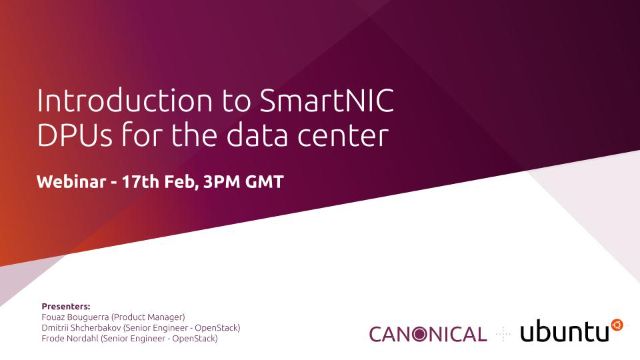 Softwarisation has been continuously influencing the data centre during the past two decades, from compute to networking to storage, culminating in software-defined data centres (SDDC). For example, networking functions, such as virtual routing and switching done in software on a hypervisor CPU have become a norm. However, performance optimisation has been a growing concern as well. To address it, a trend was adopted recently by the major device manufacturers to redefine the data centre with the introduction of the concept of data processing units (DPUs). These are powerful accelerator cards capable of offloading various functions, such as networking and storage into specialised high-performance hardware and running a Linux distribution such as Ubuntu on their general-purpose CPU for control plane purposes. How to build a cloud infrastructure with SmartNIC DPUs: Leading public cloud providers already use custom SmartNIC designs, such as AWS Nitro or Azure SmartNIC. However, there are generally-available devices as well fit for private cloud infrastructure use-cases. If you aim to build cloud infrastructure with SmartNIC DPUs, this is the right webinar for you to learn more about: ➤ The market drivers for SmartNICs and their benefits ➤ How can SmartNIC DPUs be compared with regular NICs ➤ Where does the SmartNIC DPU fit in the data centre ➤ Understanding how SmartNICs provide a new layer of security and isolation
Related topics:
SmartNIC
Data Center
Data Center Management
Openstack
Ubuntu

Ubuntu and Canonical
Upcoming talks (3)
On-demand talks (366)
Subscribers (146897)
Get the most in depth information about the Ubuntu technology and services from Canonical. Learn why Ubuntu is the preferred Linux platform and how Canonical can help you make the most out of your Ubuntu environment.…