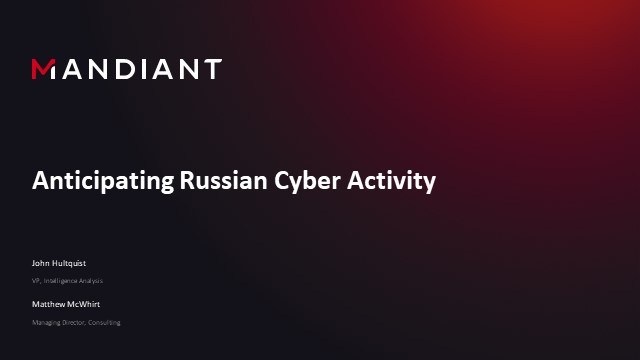 Alongside the continued tensions between Russia and Ukraine is the potential for increased cyber threat activity. Given historical Russian campaigns against Ukrainian and western targets previously, what might such activity look like now? Join John Hultquist, Vice President – Mandiant Threat Intelligence and Matthew McWhirt, Managing Director – Mandiant Consulting, for this special briefing to understand how these threats might evolve in the near future and how organizations can harden their infrastructure against destructive attacks. In particular this briefing will cover: • An overview of the Russia cyber capability, including actors who are likely to be employed currently and in future operations. • The targeting and TTPs to watch for from some of the notable threat clusters, such as Sandworm Team. • A close look at aggressive cyberattack and information operations which are more likely in the event of conflict. • Steps organizations can proactively take to harden their environment against destructive attacks.
Related topics:
Cyber Security
Russia