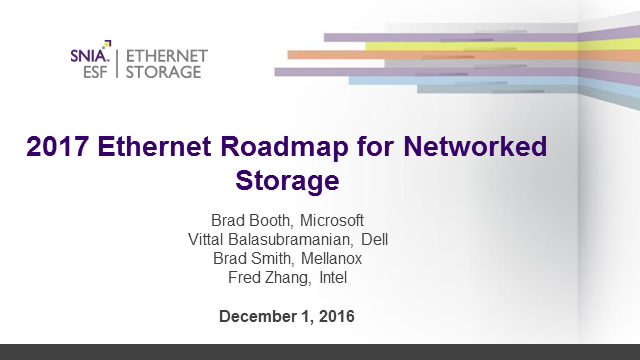 When the SNIA Ethernet Storage Forum (ESF) last looked at the Ethernet Roadmap for Networked Storage in 2015, we anticipated a world of rapid change. The list of advances in 2016 is nothing short of amazing: •New adapters, switches, and cables have been launched supporting 25, 50, and 100Gb Ethernet speeds including support from major server vendors and storage startups •Multiple vendors have added or updated support for RDMA over Ethernet •The growth of NVMe flash and release of the NVMe over Fabrics standard are driving demand for both faster speeds and lower latency in networking •The growth of cloud, virtualization, hyper-converged infrastructure, object storage, and containers are all increasing the popularity of Ethernet as a storage fabric The world of Ethernet in 2017 promises more of the same. Now we revisit the topic with a look ahead at what’s in store for Ethernet in 2017. With all the incredible advances and learning vectors, SNIA ESF is here to help you keep up. Here’s some of the things to keep track of in the upcoming year: •Learn what is driving the adoption of faster Ethernet speeds and new Ethernet storage models •Understand the different copper and optical cabling choices available at different speeds and distances •Debate how other connectivity options will compete against Ethernet for the new cloud and software-defined storage networks •And finally look ahead with us at what Ethernet is planning for new connectivity options and faster speeds such as 200 and 400 Gigabit Ethernet The momentum is strong with Ethernet, and we’re here to help you keep on top of the lightning-fast changes. After you watch the webcast, check out the Q&A blog http://sniaesfblog.org/?p=586
Related topics:
Ethernet
Storage
Networked
Storage
400
Gigabit

Network Infrastructure
Upcoming talks (1)
On-demand talks (260)
Subscribers (42269)
With virtualization and cloud computing revolutionizing the data center, it's time that the network has its own revolution. Join the Network Infrastructure channel on all the hottest topics for network and storage professionals such as software-defined networking, WAN optimization and more to maintain performance and service in your infrastructure…